—David, I want to do a course to invest in cryptocurrencies. See if I become an expert as easily as they say and get rich. If I get something out, we go halfway.

More or less, that’s how I told my boss that I wanted to do this report. From the outside, the cryptocurrency fever seems widespread, but what is it like on the inside?

A former classmate, the smartest in the place, had published days ago an appeal to attract investors in deregulated money. Soon, they stopped at Latvia to a young man who used the Wifi of the hotels on the Costa del Sol to scam crypto and the alarms were going off: is this world easy or is it easy to fall scammed? What about myth and what about reality? Can you enter and win easily?

Andrés Iniesta joined all this. The timid footballer, the author of the World Cup goal that Spain won, the man who likes Catalans and meringues, Sevilla and Betis, people from the PP and the PSOE and, last but not least, one of the most important fortunes greats of Spanish sports, after Nadal and Alonso.

Iniesta announced through his Twitter this week that he was starting in the world of cryptocurrencies. I saw it clearly: if Andrés says it, it is not a lie. Is Iniesta going to recommend something bad to you? I thought quickly. Binance for all.

Cryptocurrencies are on the rise. Around us, many people are meddling in the worlds of decentralized currencies. From a family member, a friend or even yourself.

Since the creation of BitcoinBack in 2008, there are many who have opted for the different virtual currencies, unregulated money, without the control of central banks or states, which attracts many.

In general, there are many free courses to start investing. On YouTube they are easy to see: they encourage you to invest your money, there are highly visual icons with fire and banknotes and the fixed images usually have the symbol of Bitcoin, a shiny golden coin with the symbol of the dollar.

But there are also paid cruses for those who start. EL ESPAÑOL has taken one of these quick courses to see if they are as effective as their titles say. In this case, we have paid 9,99 euros for a course that they told us was worth 99.99 euros on Udemy. Thanks for the offer, Black Friday.

Title: Investing in cryptocurrencies for beginners. In the description of this course, the first paragraph reads: “It is impressive how there is still poverty having #cryptocurrencies within everyone’s reach. We are in the era of the democratization of money, economic inequalities have their days numbered, it only depends on you to get on the train of the evolution of money “.

Nothing can go wrong.

Before this paid course I had seen a few others on Youtube. “Not many dare to create this content,” he goes on to say. professor ludwig, who teaches us the course, at the beginning of the videos. And thank goodness, because the truth is that very few are good speakers.

Avatar of the teacher who teaches the course.

The first sessions are based on a Glossary of terms that we will use as we go into the sale of cryptocurrencies. Centralized money vs. decentralized; cryptocurrency; what is an asset; what is profitability; what is utility; what are stocks; what is FIAT money; the Hash; the Blockchain; what are Bitcoin; the altcoin; stablecoins; the tokens; crypto mining; exchange platforms; the wallets; NFT …

During the course each and every one of the terms is explained to us. Not very fluent, but effective.

There are quite a few economic terms that must be handled before entering to invest in cryptocurrencies. Knowing the world well is essential, as in any investment bet. In the end, cryptocurrencies are ultimately governed by the law of supply and demand and function like other financial markets, although without any regulation.

If any of the names mentioned above do not sound familiar to you, my recommendation is that you do not have in mind to invest in Bitcoins for a while. Please, if you are going to invest (and not only in cryptocurrencies), do it very calmly and with sufficient funds, because not only money is made here. No matter how much you have seen or heard, money is lost here too.

We reflect it in this report because, during the search, we have found some claims that sell this system as an easy way to earn money. And it is not. “Learn how Cryptocurrencies work, generate profits and withdraw your funds to your local bank,” the paid course goes on to say. It may be, but it may not.

Among the ads seen, one of the least aggressive is that of Iniesta. The former FC Barcelona footballer put a message on his networks that said: “I am learning how to start with cryptocurrencies with BinanceEs”.

I tell it as they have said in the course: Binance is an ‘exchange’ platform, the largest in the world. To put it simply, it is like a bank that sells you currency. And it is the best way to do ‘trading’, that is, buy and sell in the short term to obtain returns.

However, announcing it has cost Iniesta a slap on the wrist, as well as multiple criticisms. Because yes, there are people willing to scold Andrés and, in this case, it has been the National Stock Market Commission.

“Hello, Andrés, crypto assets, being unregulated products, have some relevant risks. It is advisable to read the statement from CNMV of 2/9/2021 and educate yourself thoroughly before investing in them or recommending others to do so, “the commission wrote.

Hello, @ andresiniesta8, crypto assets, being unregulated products, have some relevant risks. It is advisable to read the statement from @CNMV_MEDIOS from 2/9/2021 https://t.co/SWRF73xEJj and educate yourself thoroughly before investing in them or recommending others to do so

When they explain us how to register on the different platforms, Ludwig tells us to enter his code to receive bonuses. Everything adds up here.

Professor Ludwig already told us that he did not understand how poverty still exists when there are these types of assets in the market, available to almost everyone. Faced with this vision, there is that of the CNMV, much more critical and, probably, more educated than that of our professor.

The commission warned in February of this year that “their extreme volatility, complexity and lack of transparency make them [a las criptomonedas] at a high risk bet. ”

This is not a frontal attack on decentralized money, but a warning. The lack of regulation in the European Union means that investors lack the security that other financial products offer them in case of scams. In addition, he adds that they are not products for small savers.

Although the best known is Bitcoin, it is estimated that there are more than 7,000 virtual currencies. Hence the risk. 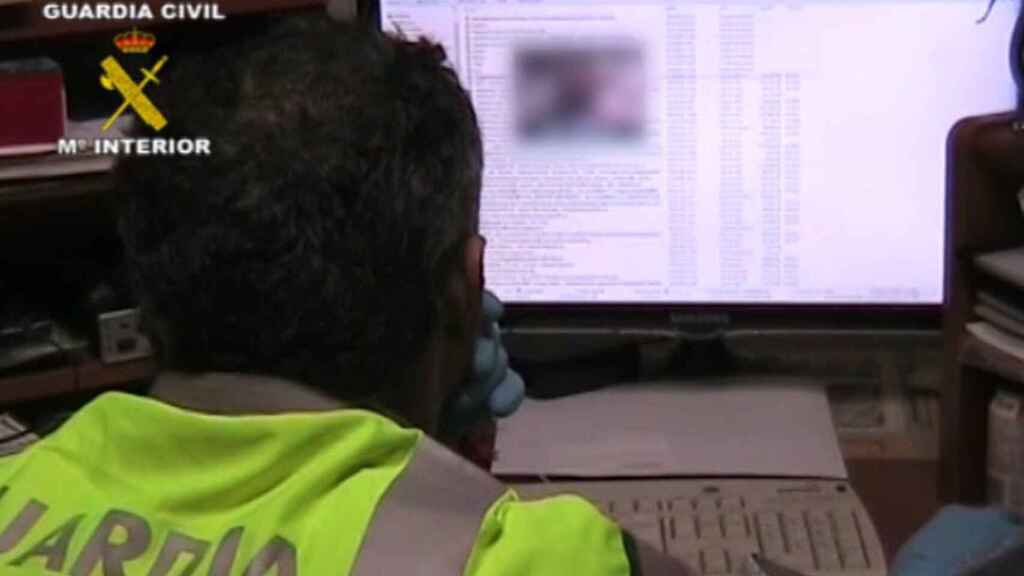 An agent of the Civil Guard observing a computer screen.

Professor Ludwig explains it during the course. You have to be very attentive and look at the capitalization rankings to decide in which currency to invest.

Coinmarketcup is a platform to know the top 100 cryptocurrencies by market capitalization. In it we can estimate which currencies are more reliable for investors and which less. Obviously, the one that capitalizes the most is Bitcoin.

Ludwig tells us about Alexatraffic Rank and also of Binance, platform announced by Iniesta. The objective is to weigh whether, for us, a virtual currency is reliable or not. Then, we will access the websites of these projects to see if they convince us.

The problem: Ludwig sends us to the website of the virtual currencies themselves so that they can tell us about them. And indeed, as you well know, no one is obliged to plead guilty. Where will the money we invest in these projects go? Could they be destined to improve the world or could they end up in the hands of drug traffickers, for example?

The CNMV also warns that “the distributed ledger technology used to issue cryptocurrencies carries specific risks. Their custody is not regulated or supervised. The loss or theft of private keys may lead to the loss of cryptocurrencies, without the possibility of get them back “.

That has been explained to us by Ludwig, of course. He has recommended that our password in the virtual wallet, where we keep the acquired cryptocurrencies many times, we write it down on paper, in a safe place.

Let’s not fool ourselves: thefts and scams are possible in all sectors. Full security is impossible to achieve. But, with the issue of cryptocurrencies, the probabilities increase due to its null regulation.

Hodlife, The Unicorn Token. Do you know this cryptocurrency? It was created six years ago by a young man in his twenties. He used a false name and documentation and hired a Spanish actor to impersonate him in the promotional videos. He was the mastermind of the fraud operation and this past week he was arrested in Latvia thanks to a Civil Guard operation.

It is considered as a major crypt swindlers from Spain. In order not to be tracked, he used the Wi-Fi connection of the most glamorous hotels on the Costa del Sol. When investors had placed their trust in him, he pulled back the blanket and took every last asset with him. He exchanged it for currencies and left investors’ portfolios at zero.

To carry out the deception, made your virtual currency look reliable. He created Twitter profiles, a Telegram channel and even a website. All the steps that Ludwig had told me to check before trusting the cryptocurrencies in which I was going to invest.

The creator of the plot led a high train of life. In turn, it had a network of assistants, according to the Benemérita in a statement. They had moved more than 600,000 euros and there were more than a thousand affected.

The end of the course

The truth is that I don’t really know who Ludwig is. I have not seen his face and I only know his voice, if it is him. Your photo is blurry and your social media profiles don’t give me security. The more I hear him explain, the more reluctance I have towards him.

According to the description on the platform where I bought the course, Ludwig is “Co-founder of Fintech Banco Student. Financial consultant and expert in decentralized finance (DeFi), professional in data science applied to entrepreneurship, developer of financial applications and self-taught graphic designer”.

He also has the title of “Finance Engineer, Master in BI Business Intelligence”. I believe you, Ludwig the teacher.

But to Caesar what is his. It has taught me to interpret the graphs and to know how to handle myself on cryptocurrency trading websites easily. It tells you how to buy and sell, as well as to prepare all the operations so that the assets are bought and sold in the best conditions. Come on, there would be no possibility of losing, beyond the scam or some kind of bankruptcy.

As a summary, he has taught us the terms, how to register on various platforms, how to buy cryptocurrencies, how to trade easily and how to withdraw money.

He has convinced me. I program the machine to buy when the cryptocurrency has a minimum value and sell it when it has a higher value, guaranteed profit. As Ludwig explains it in just over three hours, in which he forgets to tell you certain details. For instance, And the risk? Where is it that I don’t see it? If I start to invest, I will notify you in another report similar to this one, but telling the experience. Well actually, with such an easy win, you will realize that I did it because I will have stopped writing. Or not.