The rivalry between China and the US has no end affecting many companies such as DiDi Glb Sp ADS-A, who has decided exit the New York Stock Exchange to redirect your trading operations in the hong kong stock exchange due to Beijing pressures according Ryan McMorrow, Sun Yu y Tom Mitchell en Financial Times.

The company, which has been hit by increased regulatory scrutiny in China, wrote on its official account on Weibo that it would begin the delisting process and prepare to go public in Hong Kong.

Didi said in a separate statement that its board of directors had authorized the delisting of its US depositary shares from the New York listing “while ensuring that the ADSs were convertible into freely tradable shares of the Company on another stock exchange internationally recognized “.

The beginning of the repression

Didi launched its initial public offering of $ 4.4 billion in New York in June. Days later, Chinese regulators ordered the app to be removed from national app stores. He is also banned from registering new users and underwent a extensive government investigation about their practices cyber security.

Following Didi’s IPO, Chinese regulators noted that other companies hoping to follow in his wake would be subject to stricter approval procedures, especially if they administered data considered sensitive by Beijing.

“This is the nail in the coffin for the dissociation in the stock markets between the United States and China,” he said. Andrew Collier, Managing Director of Orient Capital Research in Hong Kong. “Regulators are being pressured to do this because Xi Jinping has clearly adopted a very nationalistic tone in terms of capital flows, particularly from the United States. “

Didi’s IPO, which was completed the week before the Chinese Communist Party celebrated its centennial, angered party and government officials who believed the group had put aside its concerns regarding national security and the vast treasure. of maps and other confidential data of Didi.

The listing also came in the middle of a Long-standing crackdown on dominance by China’s largest tech groups which began in November 2020, when President Xi Jinping ordered the last-minute cessation of the dual listing of Ant Group, the fintech platform of Jack Ma in Shanghai and Hong Kong. .

Ma has practically disappeared from public view. Cheng Wei, Didi CEO, and Jean Liu, President, have also kept a low profile as they seek a resolution with Chinese regulators.

“After this high-profile listing turned out to be a big mistake, all Chinese companies will think twice before going to New York,” he said. Chen Long of Plenum, a Beijing-based consulting firm.

Other reasons for leaving

Didi’s rush to announce the plan to move his listing came just before the end of a six month lock at the end of December that will allow company executives and almost all of its shareholders to begin selling shares in New York.

“The government can order something without realizing how complicated it is,” said a lawyer in Beijing about pressure from the Chinese authorities on Didi to leave the United States.

The firm indicated that it will first seek listing in Hong Kong and later will urge US ADS holders to convert. But the city’s stricter requirements for companies to fully comply with local laws were a key obstacle that pushed Didi to the US. 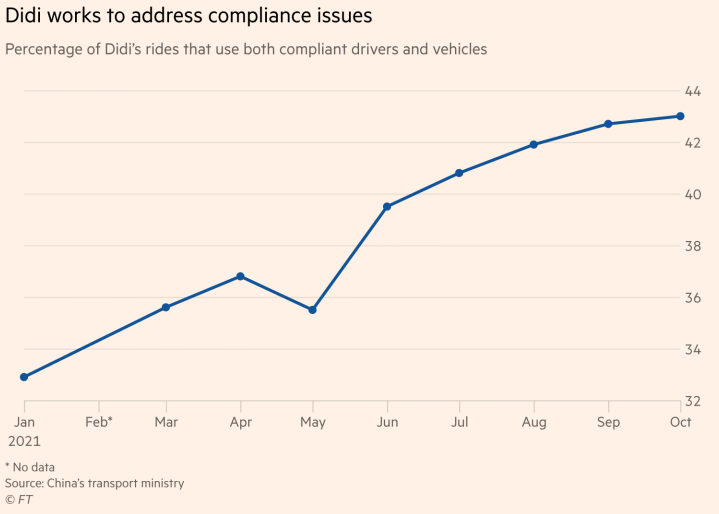 Didi has fought to make sure all of his drivers and their cars are properly licensed.

The lawyers said that Beijing would have to provide clarity on Didi compliance issues so that the list is made quickly.

A Beijing-based Didi investor said any major shareholder was unlikely to object to the delisting, especially if it solves the group’s clash with regulators.

“Large shareholders such as SoftBank, Sequoia y Tencent they will not dare to protest and challenge the government, ”said the investor.

Didi said it would hold a shareholder vote on its delisting plans.